As of Monday, October 3 2022, the total debt of the United States government topped $31 trillion.

That eye-catching number should prompt all of us to reflect on what the growing debt means for future generations (a lot) and whether our elected officials have a plan to deal with it (they don’t).

The most important thing to recognize about the $31 trillion debt is that its size in dollar terms is not as important as the fact that it is on an unsustainable track.

Two non-partisan agencies, the Congressional Budget Office (CBO) and the Government Accountability Office (GAO), have concluded that unless actions are taken to cut spending, raise taxes, or both, the debt will continue to grow faster than the economy.

That’s bad for future generations because it will harm long-term economic growth, greatly increase interest payments on the debt, squeeze out other government spending, and potentially make it more difficult to respond to future challenges, including economic downturns, national security and climate change.

The other component is “intragovernmental” debt, which the government owes itself, such as money owed to the Social Security Trust Funds, the Medicare Hospital Insurance Trust Fund, and the Civil Service Retirement and Disability Fund. Intragovernmental debt totals $6.8 trillion. 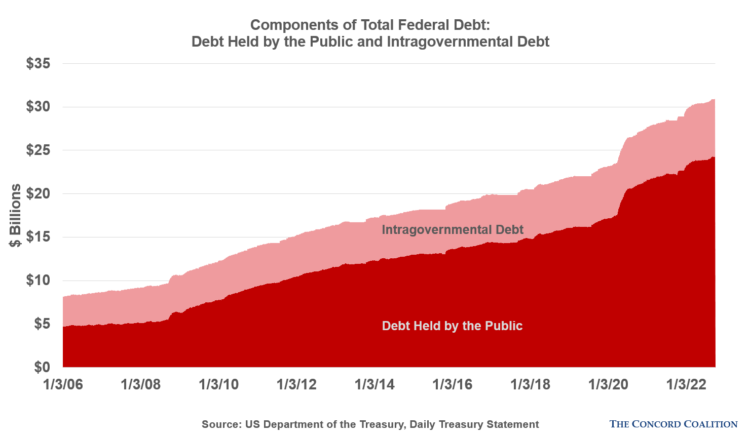 Both components of the total debt are important.

Debt held by the public rises and sometimes falls, depending on the government’s immediate borrowing needs. It represents the cumulative amount of borrowing required to finance budget deficits. Because debt held by the public flows through financial markets, it has more immediate relevance to the economy than intragovernmental debt, which is a matter of internal bookkeeping.

Unlike debt held by the public, the growth of intragovernmental debt does not reflect an imbalance in the government’s annual cash-flow. It represents a very different problem — growing long-term obligations that future taxpayers will have to pay for when the Treasury has to transform these bonds into benefits.

As noted, however, it is the long-term trajectory of the debt that is the most concerning. On July 27, the Congressional Budget Office released its 2022 Long-Term Budget Outlook. There was a nugget of good news. Debt held by the public is now projected to be lower over the next 30 years than it was in last year’s report.

That’s where the good news ends.

The reduction was not caused by lawmakers stiffening their spines and making hard choices on spending and tax policy. Instead, it came from changes CBO made in its methodology for projecting the long-term costs of healthcare and interest payments on the debt.

Moreover, these changes, which reduced projected spending in both categories, did not alter the basic trend. In last year’s report debt held by the public was projected to hit 202 percent of GDP by 2051. In this year’s report, that number is “only” 180 percent of GDP. Either number is far above today’s level, which is just below 100 percent of GDP, or the average level (46 percent) over the past 50 years. Fiscal policy remains on an unsustainable path. 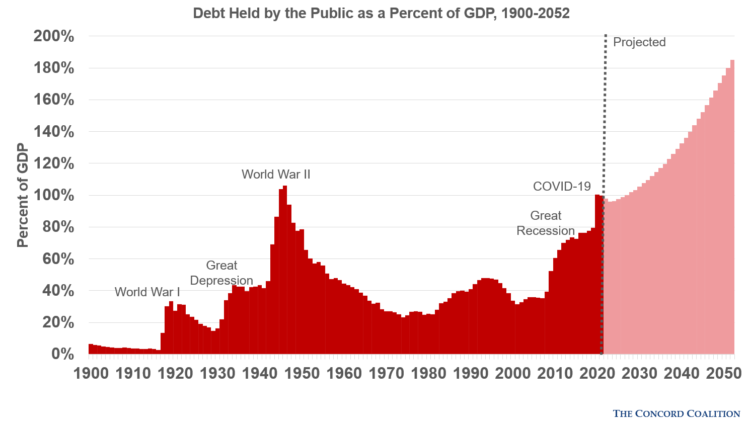 That result should come as no surprise. Costs are rising faster than revenues for Social Security and healthcare programs, workforce growth is slowing, and interest payments on the nation’s debt are going up.

A common theme is the effect of population aging.

In CBO’s projections, the share of the population aged 65 and older will grow from 17 percent this year to 22 percent in 2052.  Population aging is the main driver of Social Security’s rising costs. It also accounts for roughly one-third of the projected cost growth in the major healthcare programs (Medicare, Medicaid, Children’s Health Insurance Program and premium subsidies and the Affordable Care Act) This adds to the cost growth of these health programs caused by the tendency of healthcare costs to outpace economic growth, sometimes referred to as “excess cost growth” 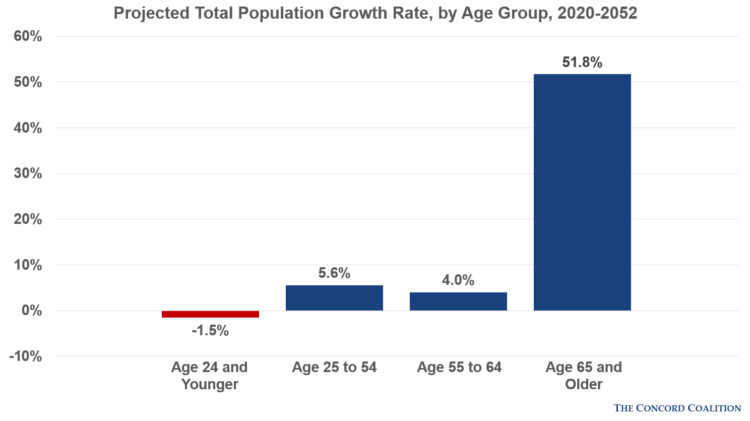 By 2052, CBO projects that under current law spending for Social Security and the government’s major healthcare programs would grow from 10.7 percent of GDP to 15.2 percent. As a share of non-interest federal spending, they would grow from 48 percent this year to 66 percent in 2052.

But it is not just the rising number of Social Security and healthcare program beneficiaries that will have an impact on future budgets. Population aging will also have an impact on the economy. The CBO projects that the economy will grow at an average annual rate of 1.7 percent over the next 30 years (adjusted for inflation). That would be a significant drop from the 2.5 percent average over the past 30 years. The main reason for the slowdown is that potential labor force growth, a key component of economic growth, is projected to shrink by about two-thirds from the recent historical average.

Low interest rates on government debt slow but do not halt the unsustainable path we’re on. The constant accumulation of massive new debt on an annual basis would eventually overwhelm the effect of low interest rates. In CBO’s projections, interest costs rise from a modest 1.6 percent of GDP this year to 7.2 percent of GDP in 2052, far above the 1.5 percent average over the past 50 years.

It’s not a pretty picture. We’re placing a growing burden on future workers and investing less in the economy that will be called upon to support that burden. This generationally irresponsible pattern will continue absent major changes that alter the long-term trend lines rather than simply postpone a crisis.

So as candidates in the midterm elections campaign to win a seat in Congress and take up the reins of government, they should acknowledge that they will also take up responsibility for dealing with the $31 trillion debt. They should put forward budget plans that reflect this fiscal reality — or explain to the American people why they think it doesn’t matter.

The Bureau of Economic Analysis released its preliminary estimate of real GDP growth for the fourth quarter of ...

Like the legislative equivalent of Groundhog Day, Washington lawmakers are once again in a last-minute rush to pass ...

While Congress dithers over fiscal policy and an end-of-year omnibus spending bill, this was a benchmark week for ...

Republican lawmakers this week are rallying behind a version of the balanced budget amendment that would enshrine a ...

Some Common Ground on Tax Reform

Democrats and Republicans have long appeared to have an irreconcilable difference on tax policy: Democrats want more revenue, ...