The Defense Budget: A Primer (Part 1)

Most Americans know that the defense budget constitutes a substantial portion of federal spending, but there remains plenty of confusion as to just how much. While a quick search can answer that for you (spoiler alert: $714 billion in FY 2020 according to the Congressional Budget Office), once you get beyond that simple figure, the waters become murky. How does that compare with the overall federal budget? What do we spend the money on? Is it growing, shrinking, or relatively flat? What role does it play in the fiscal outlook relative to other programs?

What is the “defense budget”?

A common point of confusion regarding the phrase “defense budget” is the actual meaning of the term. Counterintuitively, it does not refer solely to the “Pentagon Budget” which covers just the conventional military spending under the Department of Defense (although this is the largest portion of the defense budget1).

The term “defense budget” is the portion of the federal budget allocated to the National Defense budget function (numerically, function 050), and is the sum of three subfunctions:

Department of Defense – Military (budget function 051) consists of all spending on behalf of Department of Defense military activities including military personnel salaries and benefits; procurement of weapons, ships, aircraft, and vehicles; construction of military bases, buildings and housing; military research, development, testing, and evaluation; and operations and maintenance. In 2019, outlays in function 051 accounted for nearly 96% of total national defense outlays, or $654 billion.
Atomic Energy Defense Activities (budget function 053) includes spending by the Department of Energy and other agencies for nuclear-related purposes such as developing naval reactors and weapons activities. In 2019, function 053 outlays totaled 3.2% of total defense spending, or $22.8 billion
Defense Related Activities (budget function 054) covers a narrow subset of activities in a small group of agencies that perform defense-related activities like the FBI, CIA, Coast Guard, FEMA, and the Department of Homeland Security. In 2019, outlays for function 054 accounted for 1.2% of total defense outlays, or $9.3 billion.

Notably, the defense budget does not include:

Funding for veteran’s healthcare and benefits, which is covered under budget function 700. These numbers are significant too, with outlays totaling just under $195 billion in 2019.
Other activities that could plausibly be construed as related to defense, such as the majority of Coast Guard activities, which are covered under the budget function Transportation (400), along with TSA.
Many homeland security functions, such as border security which fall under Administration of Justice (750), and many diplomatic and alliance-related activities are covered under International Affairs (150).

How does defense fit within the overall federal budget?

One poll from 2010 found that Americans commonly believed that defense spending constituted more than half of all federal spending, with a majority of Americans believing that it constituted more than 30%. In reality, the actual proportion of the federal budget spent on national defense was 19% that year, and it’s even lower today. 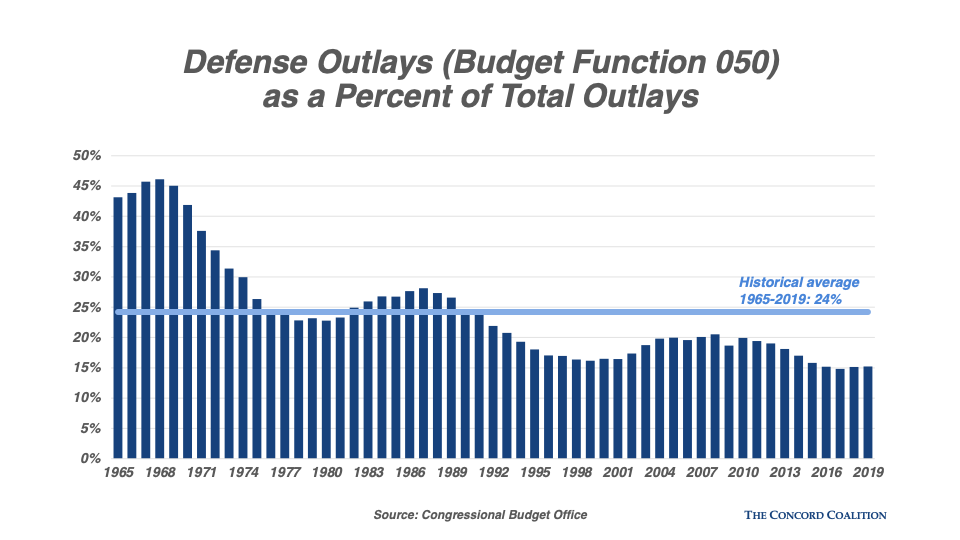 Data from 2019 (the most recent outlay data without a COVID-related skewing) shows that defense outlays made up just over 15% of total federal budget outlays that year, roughly equal to 3.2% of GDP. 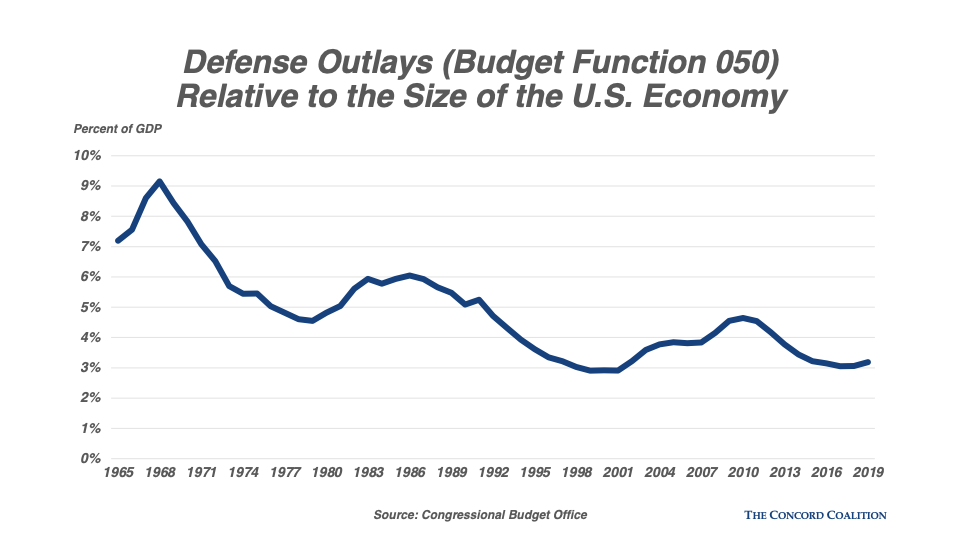 Framing the role of defense spending in the federal budget as a percentage of discretionary spending can lead to a parade of false conclusions about how to remedy our national fiscal crisis, and more importantly, it obscures the role of larger government programs in causing and perpetuating the fiscal crisis.

How is the Pentagon’s budget allocated?

Spending under budget function 051 falls into one of seven buckets:

The table below illustrates the contributions of each category to total spending within budget function 051. 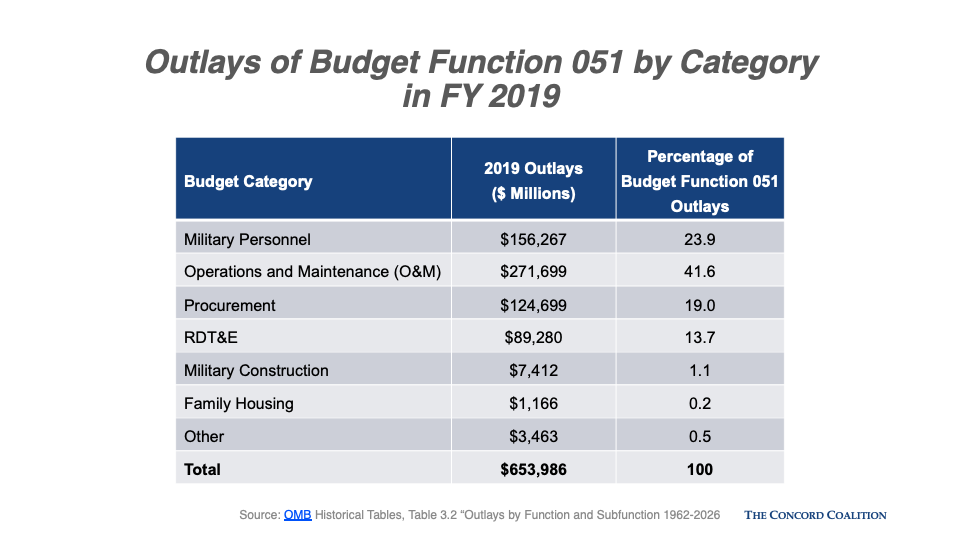 As the table above illustrates, Operations and Maintenance comprises the largest portion of  the Pentagon Budget, followed by Military Personnel. These two categories cover the majority of costs related to staffing and executing military operations, as well as the military healthcare system. Combined, O&M and Military Personnel comprise roughly two-thirds of the Pentagon Budget.

Procurement and RDT&E combine to comprise another third of the Pentagon spending. These categories can be consolidated under the moniker of “acquisitions”, the purpose of which is to equip and arm the military with the weapons systems, technologies, vehicles, and other equipment necessary to execute its missions.

Military Construction and Family Housing are sometimes grouped together and called “infrastructure” and combined they typically account for about one percent of Pentagon Spending.

Stay tuned for part 2 of this defense primer when The Concord Coalition analyzes the Biden defense budget for FY 2022.

2 Discretionary spending used to consume half of the federal budget but has shrunk to one-third. The remaining 70% of total federal spending is composed of  mandatory expenditures on entitlements such as Social Security (23%), Medicare (17%), Medicaid (9%), other mandatory programs (13%), and interest on the national debt (8%).

This week on Facing the Future, we welcomed back Dr.

The Growing Cost of Russia's War in Ukraine

This week on Facing the Future, we examine the growing human and economic cost of Russia’s invasion of Ukraine as it grinds on into its 6th month.