Social Security and the Federal Budget

Contrary to the views expressed in the previous Statement of Actuarial Opinion, many observers believe this discussion should be part of the Trustees’ duty to inform the public about the financial status and operations of the Social Security program.  The Concord Coalition shares that view.

The purpose of the annual Social Security Trustees’ report is to assess the actuarial status of the Old-Age, Survivors and Disability Insurance (OASDI) trust funds.  While the trust funds are self-financing from an accounting perspective, the accumulation and depletion of trust fund assets (government securities) affect the timing and amount of other Federal resources needed to pay government expenditures, including OASDI benefits and interest on the Federal debt.  Any actuarial assessment of the trust funds would be incomplete without considering their impact on the Federal budget.

While the allocation of Federal debt between the trust funds and the public may not affect the total amount, it does affect the payment of interest.  During the trust fund accumulation period, the government needs fewer resources because it does not actually pay interest to the trust funds.  Trust funds receive credit for accrued interest in the form of additional debt.  This is merely an accounting transaction, however, and does not require other Federal resources.

During the trust fund depletion period, the government needs more resources because it must pay OASDI benefits in excess of payroll taxes and income taxes on benefits, as well as the interest payments on any publicly held debt incurred to pay scheduled OASDI benefits.  Interest payments on publicly held debt require the government to spend general revenue or borrow from the global financial markets.[2] 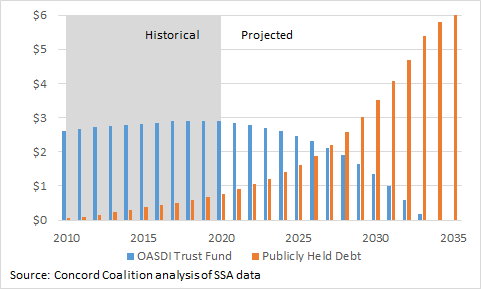 Once the trust funds are depleted, scheduled benefits can no longer be paid in full or on time.  The Social Security Administration must either reduce benefits across-the-board by more than 20 percent, or wait until the trust funds collect sufficient revenue to pay full benefits, meaning beneficiaries would receive only nine monthly benefit checks per year, instead of twelve.[4]  At that point, unless Congress takes remedial action, the OASDI programs will operate on a pay-as-you-go basis and no longer require other Federal resources.  Absent a surplus of general revenue, however, the publicly held debt incurred to pay scheduled benefits prior to trust fund depletion will continue to rise due to compound interest, thereby limiting the government’s ability to pay other expenses.

By the end of the 75-year projection period, the additional publicly held debt resulting from the money borrowed to redeem the OASDI trust funds to pay scheduled benefits until 2034, and the corresponding interest payments, would exceed 20 percent of GDP, a sum too big to ignore (see Figure 2).

Figure 2: Debt-Financing Redemption of OASDI Trust Funds Will Be Expensive (Percent of GDP) 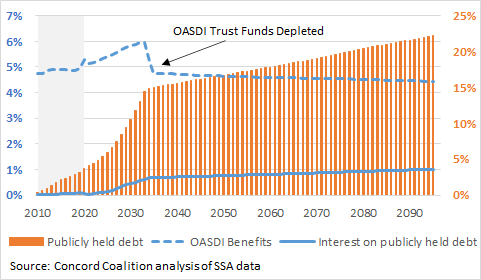 The Social Security Act identifies certain types of information that “shall” be included in the Trustees’ report but does not define this information, nor does it prohibit the inclusion of other information.[5]  The current Trustees’ report highlights the OASDI trust funds’ depletion dates and the corresponding benefit reductions, but it does not consider the budgetary impact of the accumulation and depletion of the trust funds.  These events will have a significant impact on the Federal budget which deserves the attention of both policymakers and the public, and should be included in future reports.

[2] Interest paid on public debt held by the Federal Reserve is remitted to the U.S. Treasury (minus the Fed’s operating expenses), thus requiring only a minimal net expenditure by the government.

[3] This analysis assumes a statutory debt limit increase as needed to avoid a government default on its debt.

[4] Social Security: What Would Happen If the Trust Funds Ran Out? (congress.gov)

GDP Report Surprises, the Federal Reserve Does Not

The U.S. economic recovery from the COVID-induced recession continues to surprise.