The Congressional Budget Act of 1974 directs CBO to provide to Congress an annual report summarizing baseline projections of spending, revenue, and resulting deficits (or surpluses). These estimates furnish Congress with a policy-neutral benchmark used to evaluate trends in spending and revenues and analyze the budgetary effects of proposed legislation. In addition, the CBO baseline is typically the starting point for the annual congressional budget resolution. 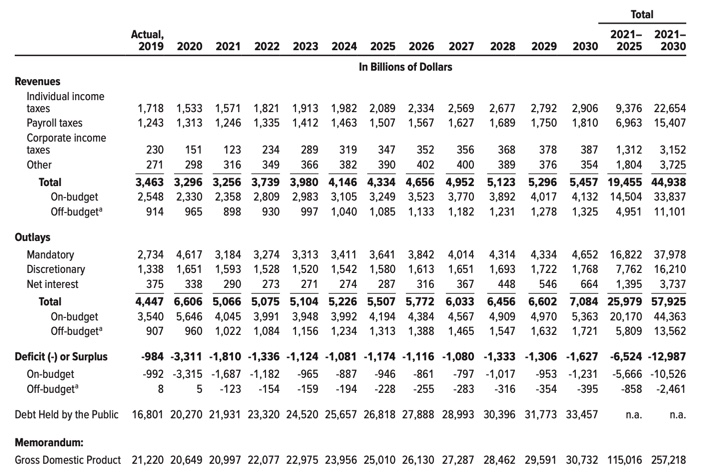 A CBO baseline has five major components: (1) an economic forecast, and projections of (2) mandatory spending, (3) discretionary spending, (4) revenues (tax and fee collections), and (5) net interest costs. Once the economic forecast is established, spending and revenue projections are estimated separately. Spending projections begin at the account level within each program and are then aggregated (within and across programs) to arrive a final, topline total. Revenue projections follow the same approach. CBO then calculates the difference between revenues and spending to arrive at a residual budget deficit for each fiscal year. The residual deficits are then used to estimate net interest costs.

CBO does not have much independence in assembling the components of the baseline. Aside from developing their own economic projections, most of the rules and assumptions that underpin the projections of spending and revenues are specified in budget law. Chief among these is section 257 of the Balanced Budget and Emergency Deficit Control Act which directs CBO to make certain assumptions when constructing the baseline. In particular:

These rules of construction result in a baseline that reflects current law, not current policy. For this reason, the CBO baseline should not be interpreted as a prediction of future budgetary outcomes but rather a snapshot of future trends, such as the growing and sustained imbalance between spending and revenues. CBO often compensates for this shortcoming by producing policy alternatives that can be layered onto the baseline and provide a more robust snapshot of spending and revenue trends.

A CLOSER LOOK AT BASELINE CONSTRUCTION

Economic projections. Federal spending and revenues are driven in part by the performance of the US economy. Key macroeconomic variables CBO uses to forecast spending and revenue include real and nominal GDP and their components, various measures of inflation, workforce demographics (population, labor force participation, productivity, and wage growth), measures of income, and short-and long-term interest rates. These forecasts are developed with the advice of CBO’s panel of outside economic advisers.

Mandatory spending consists of outlays for programs with permanent authorizations that provide payments to individuals, businesses, and state and local governments. The largest mandatory programs are Social Security, Medicare, Medicaid, and the retirement program for federal civilian workers. There are hundreds of mandatory accounts and subaccounts of diverse size, character, and complexity, and each with their own projection methodology. For example:

Revenues. There are more than 50 sources of revenue in the budget baseline. CBO formulates projections for each one and aggregates the individual revenue streams to generate the revenue baseline. In each case, CBO applies the appropriate tax rate to the projection of the tax base according to current law. For example, the September 2020 baseline reflects expiration of the 2017 tax cuts in 2025. Because income and payroll taxes account for approximately 90% of federal revenues, CBO’s revenue projections rely heavily on CBO’s forecast of wages, other forms of personal income, and corporate profits.

Net interest. To estimate the net interest baseline, CBO takes into account several factors such as the existing stock of outstanding debt and interest owed on that debt, projections of future deficits and other financing obligations, CBO’s forecast of interest rates from the economic baseline, and a projected mix of securities that Treasury could issue. The net interest baseline also includes projections of offsets from interest income derived from loans and cash balances.

WHEN IS THE CBO BASELINE PUBLISHED?

In a normal year, CBO will publish three baseline reports for Congress: a preliminary baseline, a scoring baseline, and an update:

Federal legislation (or lack thereof) and extenuating events can delay these reports, however.

For more information about the CBO baseline, please refer to the following CBO publications:

Retirement: When and How?

On the latest Facing the Future, I was joined by Jason Fichtne

No Time to Hang Up Your Hats

On the latest Facing the Future, I was joined by Jon L

This week, the Congressional Budget Office released its much-anticipated update to the 2020 budget baseline.