The Vital Role of Immigration in an Aging America

Washington, DC – The Concord Coalition and the Global Aging Institute (GAI) today jointly released a new issue brief entitled The Vital Role of Immigration in an Aging America. The paper, which is part of a quarterly issue brief series called The Shape of Things to Come, explains that, even as immigration to the United States has been declining, its importance to the nation’s demographic and economic growth has been increasing. 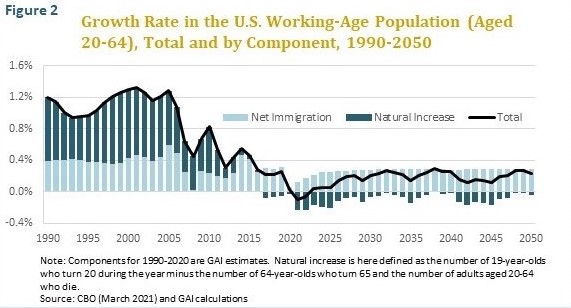 “America’s story can in large part be told as a story of immigrants. Yet as important as immigration has always been in shaping America’s character and culture, it has never been as critical to growth and prosperity as it will be in the coming decades,” said Richard Jackson, President of the Global Aging Institute and author of the paper. “In the past,” he added, “immigrants were what kept the workforce growing. In the future, they will be all that keeps it from shrinking.”

“Immigration has become such a hot button political issue that it is nearly impossible to get beyond the partisan rhetoric and concentrate on the facts that should be informing policy decisions,” said Robert Bixby, Executive Director of The Concord Coalition. “There is considerable room for principled disagreement on matters of immigration policy, especially how to deal with border security and illegal immigration,” he added. “What is not in question is that an aging America would benefit from increased immigration. Unfortunately, immigration has been falling since the Great Recession.”

Key findings of the issue brief include:

“Several developed countries have made immigration the lynchpin of their long-term strategy for confronting population aging,” said Bixby. “Meanwhile, the United States continues to lurch from near-term crisis to near-term crisis.”

It is difficult to imagine how an aging America can be a prosperous America without the impetus to growth and the promise of renewal that immigration brings, the issue brief concludes. As we look to the future, it is incumbent upon federal policymakers to take a proactive, strategic approach to immigration policy. America has always been a nation of immigrants, and immigration still has a vital role to play in its aging future.

Click here to read the whole paper, "The Vital Role of Immigration in an Aging America"

Other papers in the series can be found by clicking here.

Tune in to Concord's upcoming podcast episode on Facing the Future (broadcast Wednesday) to hear Jackson and Bixby discuss the paper.

The Concord Coalition is a nonpartisan, grassroots organization dedicated to fiscal responsibility. Since 1992, Concord has worked to educate the public about the causes and consequences of the federal deficit and debt, and to develop realistic solutions for sustainable budgets. For more fiscal news and analysis, visit concordcoalition.org and follow us on Facebook @ConcordCoalition and on Twitter: @ConcordC

This week on Facing the Future, we hear excerpts from a special event held recently at the National Press Club to celebrate the 30th anniversary of The Concord Coalition’s foundi

This week, we have a special Thanksgiving edition of Facing the Future, taken from a recent Concord Coalition panel discussion held at Fresno State University in California, mode

This week on Facing the Future, we had an all-star panel of Congressional staff veterans taking a look at the results of this year’s midterm elections and what, if any, discernib

Social Security: A New Solution to an Old Problem