QUESTION: Congress has spent much of this year necessarily focused on the coronavirus. The new fiscal year begins on October 1, but neither chamber has passed a single spending bill for 2021. Are we headed for another government shutdown in the fall?

ANSWER: Lawmakers in Washington have one must-do task each year: pass the twelve annual discretionary spending bills for the upcoming fiscal year before October 1, when the new one begins. These twelve measures fund most defense, education, transportation, energy, and environmental programs, as well as a number of vital social services like veteran’s medical care, mental health programs, and certain food programs for the needy. If lawmakers cannot enact the annual appropriations on time, or pass a stopgap measure, federal agencies and the programs they administer will shutter.

Unfortunately, Congress has a poor track record of getting its work done on time. In the past 40 years, it has completed the appropriations process before October 1 only four times – most recently in 1996 for fiscal year 1997, nearly a quarter century ago. 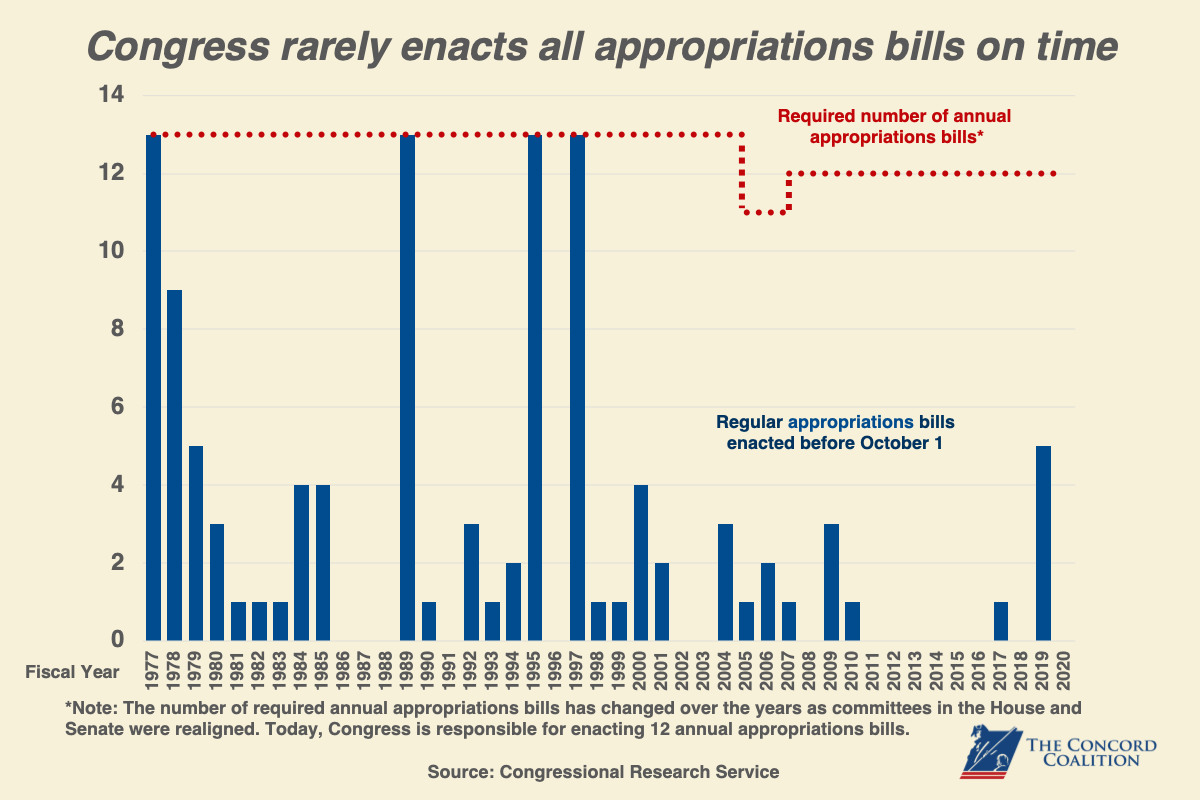 Most years, Congress is able to pass only a fraction of the required spending measures on time and sometimes none at all. When this happens, lawmakers rely on a temporary funding measure called a “continuing resolution” (CR) to keep the government open until it is able to pass the outstanding spending bills. As Congress rushes to complete its work under a CR, often it will package the remaining appropriations bills together in one giant omnibus appropriation bill or combine 2-4 spending bills into “minibus” appropriations packages.

By mid-June, both the House and Senate Appropriations committees were poised to begin a compressed and hectic schedule of spending markups. On July 6, the House rocketed forward, passing all twelve spending bills out of their subcommittees by July 8, and teed up three for full-committee consideration on July 9.

This torrid pace is relatively easy to accomplish in the House of Representatives since that chamber (unlike the Senate) is able to pass legislation with a simple majority vote. As long as the majority party can keep dissension within its ranks to a minimum, the House can be a very nimble institution. Indeed, the House expects to complete its work on all 12 appropriations bills before the August recess.

The Senate began the 2021 appropriations process with similarly good intentions, but a disagreement between Republicans and Democrats over amendments in committee halted forward momentum almost immediately. The Senate (unlike the House) needs a supermajority of senators – 60 members – to bring appropriations bills to the floor.

Republicans hold the majority in the chamber, but they control only 53 seats – they need the support of at least seven Democrats to move forward.

All of this points to one predictable outcome this year: at some point before October 1, Congress and the president will enact a short-term continuing resolution that will fund the government until after the November elections. At that point, the results of the presidential and congressional elections will be known, and lawmakers will decide whether to wrap up their work before Christmas or punt completion of the appropriations process to 2021 under a new administration.

Occasionally, Congress has struggled to pass a continuing resolution causing the government to temporarily close. During the Trump administration there were two brief partial shutdowns in January and February 2018, followed by a record-breaking 35-day shutdown that began in December 2018. Most budget watchers agree, however, that the present political climate makes any shutdown (full or partial) highly unlikely. Not only is the federal government facing dual crises in public health and the domestic economy, but it’s an election year. Republicans and Democrats alike are very eager to demonstrate their party’s ability to lead and that includes keeping the government open and functioning - at least through the November elections.