On Thursday, the Department of Commerce released its preliminary estimate of U.S. gross domestic product for the first quarter of 2021. Real GDP grew 1.6 percent over the previous quarter (2020 Q4), fueled by federal stimulus payments and an aggressive vaccination campaign that allowed businesses to relax operating restrictions.

This was the third straight quarter of real (inflation-adjusted) growth. If the U.S. economy continued to expand at this rate for the rest of the year, real GDP would be 6.4 percent larger by the end of 2021, the biggest jump since 1984. 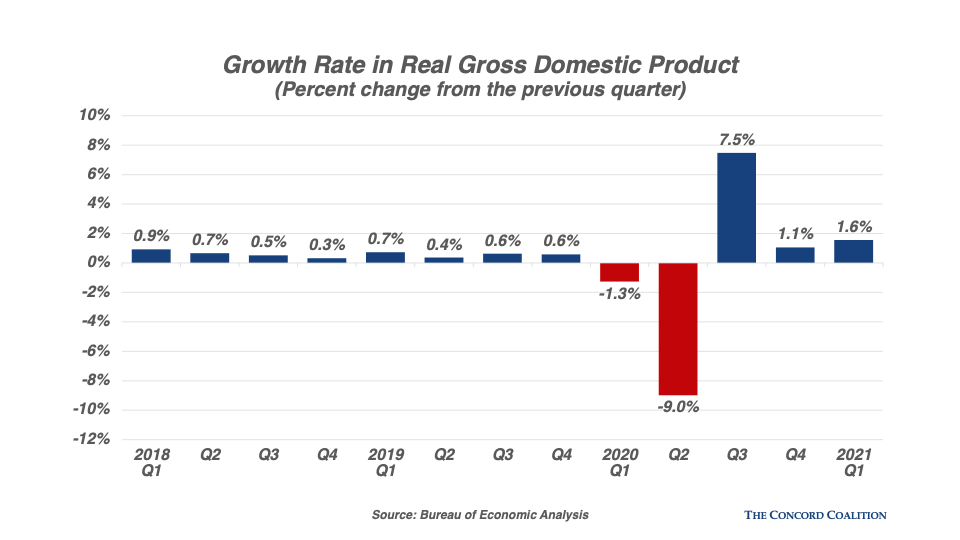 The COVID rebound has been swifter than predicted. Economists responsible for forecasting real GDP have been revising their projections upwards all year long. Today, the U.S. economy is operating near its pre-COVID level of GDP and is expected to fully recover lost ground by mid-year. 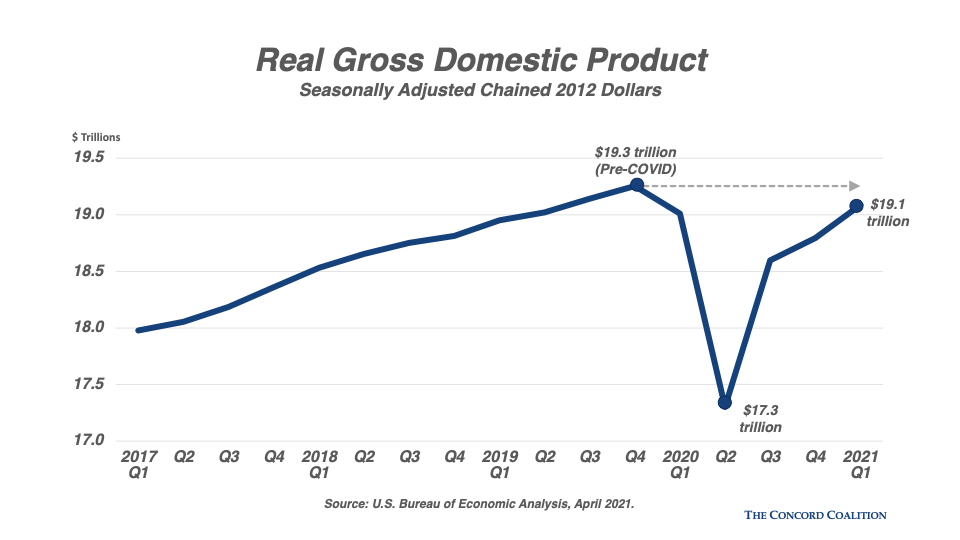 Consumer spending led the way in the first quarter as two rounds of federal stimulus payments (disbursed in late December and mid-March) and the resumption of extra unemployment insurance benefits left households with more cash to spend on goods and services.

In fact, Americans received a record amount of after-tax income in the first quarter. Disposable income rose nearly $2.4 trillion, an increase of 13.7 percent over the previous quarter, as the bulk of the $600 stimulus checks from December and the $1,400 checks from March were disbursed. Awash with cash and fewer opportunities to spend it (no travel, no dining out), the U.S. savings rate jumped from 13 to 21 percent in the first quarter.

The private domestic investment component of real GDP was mixed. Demand for residential housing was strong, but business fixed investment in plant and equipment fell. Net exports were a drag on GDP as the demand for U.S. goods and services abroad remained weak. Our trading partners trail the U.S. in vaccinating their citizens, slowing their own economic recovery and limiting their demand for American products.

The BEA report also included some data on inflation. A key metric used by the Federal Reserve Board of Governors to help evaluate monetary policy, the price deflator for personal consumption expenditures (PCE deflator), rose at an annualized rate of 3.5 percent in the first quarter, compared to 1.5 percent in the previous quarter. Federal Reserve Chairman Jerome Powell said earlier this week that price pressures that emerge from the reopening process are likely to be temporary.

Looking ahead, the outlook for economic growth over the next 2 quarters is very optimistic with estimates running as high as 7-8 percent real GDP growth on an annualized basis before slowing at the end of the year. Consensus expectations by a panel of economists polled monthly by Bloomberg expects real GDP to average 6.3 percent for all of 2021. Risks to the near-term outlook include supply chain shortages (lumber, semiconductors, etc.), logistics bottlenecks, and labor shortages in lower-wage jobs.

SIDE BAR: What is GDP?

Gross Domestic Product (GDP) is the market value of all “final” goods, services, and structures produced by the nation’s economy over a period of time, less the value of the goods and services used during production. It is the primary metric used to measure the health and strength of the U.S. economy.

GDP is calculated as the sum of four main categories of spending:

GDP data is calculated and published on a quarterly basis by the U.S. Bureau of Economic Analysis within the Department of Commerce. It is reported in both current and real (constant) dollars, the latter is adjusted for inflation.

This week on Facing the Future Tori Gorman and I went to the movies, an appropriate thing to do following the Oscars.

The Skinny on Biden’s Budget

After a one-week delay, on April 9th, the Biden administration finally released a peek at their FY 2022 budget.