After a weeks-long intraparty stalemate, House Democrats are on the precipice of advancing President Biden’s Build Back Better Act (BBBA, H.R.5376) and sending it to the Senate. The last obstacle on this leg of the bill’s journey is a cost assessment (“score”) from the nonpartisan Congressional Budget Office (CBO). What is a “score” and why is one necessary at this juncture?

What is a CBO score? A CBO score is a detailed estimate of the spending and revenue effects of legislation relative to the underlying budget baseline. A formal score illustrates the impact of each major provision on federal spending, revenues, and budget deficits for each year of the budget window. Notably, the net interest associated with any increase in budget deficits and debt attributable to the legislation is not included in a CBO score.

In general, lawmakers use a CBO score for many purposes: to help shape public policy choices as legislation is being developed, to understand the budgetary impact of final bill text on future deficits, to evaluate the impact of an amendment to the fiscal contours of the underlying legislation, and as a tool for budget enforcement. The Congressional Budget Act also requires a CBO score for every bill approved by a committee before it comes to the floor for a vote (though in reality, the committee product is not always the final version of the measure on which the chamber is voting, as is the case with the BBBA). In essence, a CBO score of legislation is just as important to the legislative process as the legal text it evaluates.

House moderates demand a CBO score before voting on BBBA. The CBO score of the BBBA—or rather, the lack thereof—took center stage in the House last week as Democratic leaders stitched together a compromise between their progressive and moderate wings that would allow the twin pillars of the Biden agenda, the BBBA and the long-stalled bipartisan infrastructure bill, to move forward.

In exchange for allowing the infrastructure bill to move forward immediately, progressives secured a written promise of support for the BBBA from five moderate holdouts—votes that are essential to getting the BBBA out of the House and to the Senate. The promise agreed to by the moderates, however, appears to come with an important condition: that a CBO score of the current text (not the committee-reported text) is available and is “consistent” with the toplines for revenues and spending in the White House preliminary estimate (see Figure 1).

This statement seems to imply (though the impact of the qualifier “but in no event…:” is unclear) that not only would the lack of a CBO score at the time of the vote negate the compromise, but that a CBO score of the BBBA that is larger than what the White House presented (how much larger?) would fail to secure the moderates’ support on the floor.

Will CBO have a score in time? A CBO score for a bill as big as the BBBA can take weeks or even months to complete, even if CBO staff are engaged as the bill evolves in the House and Senate. The current version of the BBBA is more than 2,000 pages long and spans the jurisdiction of twelve different committees. Some of the major provisions interact with each other, and some interact with tax laws that expire soon. Topline? It’s complex.

A November 9th blog post by CBO director Phil Swagel suggests that having a complete score within the timeframe dictated by the agreement may be hard to meet. In setting Congressional expectations for a formal score, Swagel wrote, “We anticipate releasing estimates for individual titles of the bill as we complete them, some of which will be released this week. Other estimates will take longer, particularly for provisions in some titles that interact with those in other titles.”

Will the CBO score be “consistent” with the White House “preliminary estimate"? According to the White House rack up of BBBA in the agreement (see Figure 2 below), the bill would increase spending (budget authority) by nearly $1.7 trillion over the 2022-2031 budget window and would be offset by more than $1.7 million in revenue raisers. The result would be a minor reduction in budget deficits over the decade, fulfilling President Biden’s promise that the bill would be “fully paid for.”

Budget experts note, however, that this assessment is dependent on some aggressive estimates for payfors, especially for IRS enforcement which the White House admits in a footnote. This suggests that the White House already expects the CBO score to fall short of the administration's assessment. 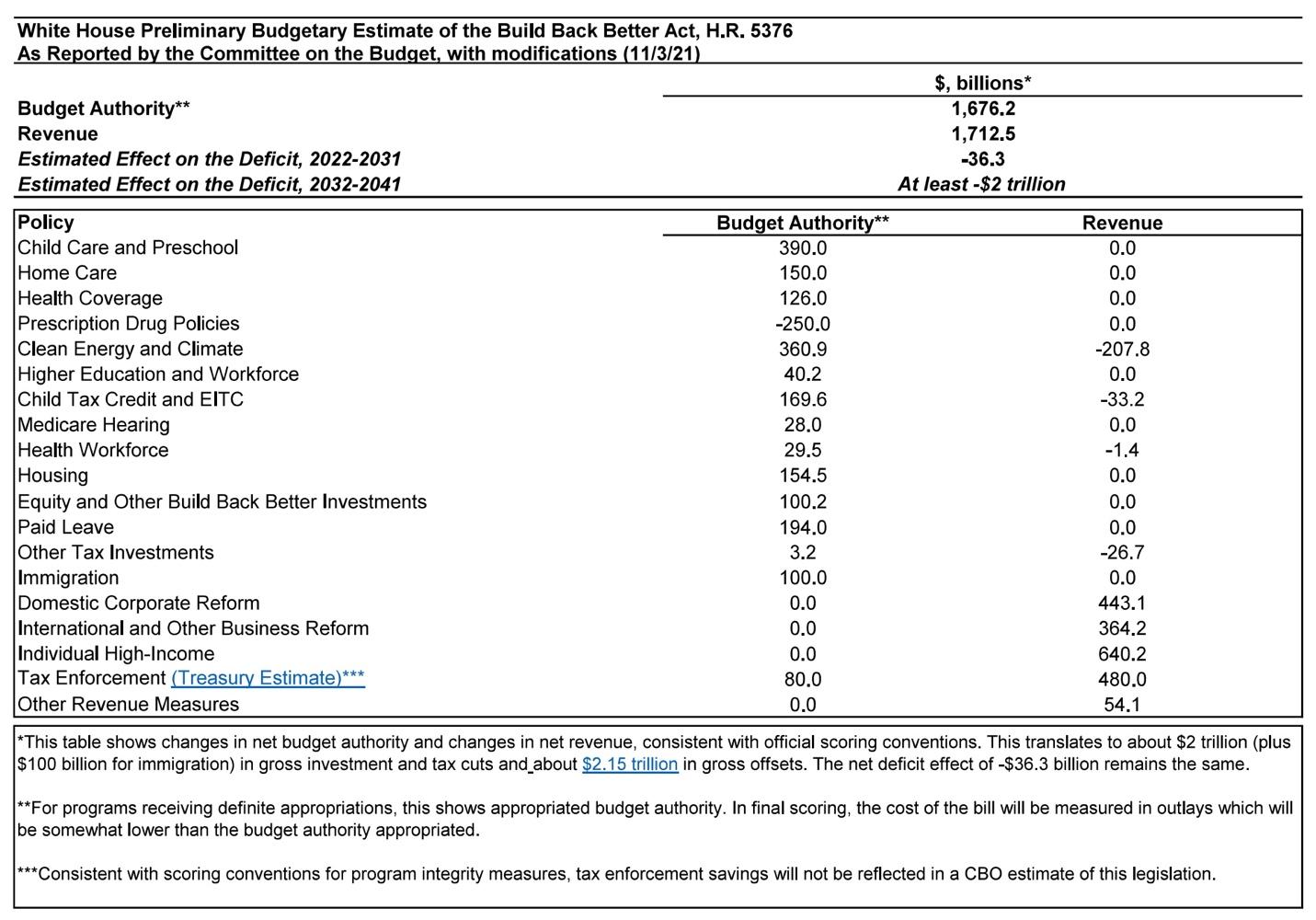 While lawmakers await CBO’s complete score, outside groups are starting to fill the information void with their own cost assessments. One key estimate arrived this week from the economists and modelers at the non-partisan Penn Wharton Budget Model (PWBM). PWBM is notable because even though it uses a different approach than CBO, its cost estimates have a reputation of approximating CBO’s. According to PWBM, the BBBA would increase budget deficits by $1.9 trillion over the 2022-2031 budget window and would offset those costs with $1.8 trillion in new revenue, causing budget deficits to rise by $118 billion over 10 years, another indication that the CBO score may fall short of the White House expectations.

The PWBM analysis also stands out because not only does it analyze the BBBA as written, but it also estimates the cost if the BBBA’s many temporary provisions are made permanent, providing a more transparent assessment of the bill’s potential cost to taxpayers. In this scenario, the bill’s tally balloons to nearly $4.1 trillion while payfors remain the same. As a result, PWBM concludes the BBBA, hypothetically, could add $2.2 trillion to budget deficits over the next decade (see Figures 3 and 4 below).

The cost differential of the BBBA—between the bill as written and the additional cost if temporary provisions are made permanent—will be a major debate point between Republicans and Democrats as the measure moves through the Senate. Already the ranking Republicans on the Senate and House Budget Committees, Senator Lindsay Graham (R-SC) and Representative Jason Smith (MO-08), have asked CBO to weigh in.

Despite efforts by House Democrats to pre-conference the BBBA with their Senate colleagues, the Senate is expected to significantly modify the bill before sending it back to the House. Provisions concerning tax policy (payfors), immigration, Medicare expansion, paid family leave, and prescription drug costs are all expected to change in the Senate--and additional CBO scores will be required. As a result, shouts of “What’s the score?” will be as common in the halls of Congress over the next weeks and months as they are in the corner sports bar.

So Much Work, So Little Time

The House and Senate returned this week after a two-week spring break.