What’s Up with Falling Birth Rates?

What’s Up with Falling Birth Rates?

Last week the National Center for Health Statistics (NCHS) released provisional birth data for 2020.(1)  Most of the media coverage focused on the fact that the number of births (3.6 million) was the lowest since 1979, and the general fertility rate (the number of births per 1,000 women aged 15 to 44), fell to its lowest level ever recorded (55.8). (2) 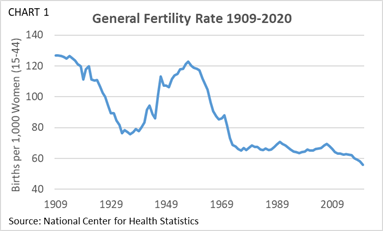 Fertility rates are important because they determine how much the total U.S. population will increase or decrease in the future--and population is a key driver of economic growth as well as the levels of government spending and revenue.  The fertility rate needed to maintain a constant population is roughly 2.1 births per woman over her lifetime.  The number is more than 2.0 because not every woman lives to the end of her childbearing years and there are slightly more boys than girls born each year.(3)

The other fertility rate, which is known as the cohort rate, wasn’t reported because for most women it hasn’t happened yet.  Unlike the period rate that counts annual births to women of all ages in a single year, the cohort rate counts births that occur over the lifetime of women born in the same year.  This measure can only be determined after all the women born in any given year have reached the age at which no additional births are expected to occur.  Today’s younger women have not reached the end of their childbearing years, so their cohort rate is still unknown.

What demographers want to know is the number of children women will have over their lifetime, which is the cohort rate.  Because this number cannot be observed contemporaneously, the period rate is sometimes used as a crude proxy by assuming women in the future will have the same number of births at each age as women in the present.  But this hypothetical assumption can be misleading. 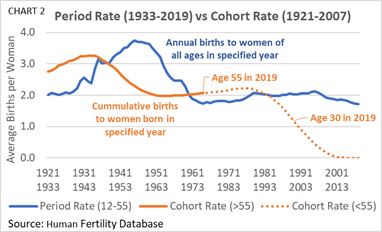 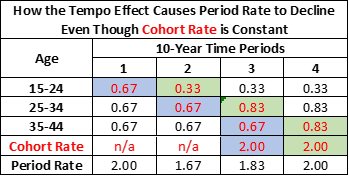 Beginning in period 2, younger women (15-24) decide they want to have fewer births when they are younger and more births when they are older, but still have 2 births overall.  Adding up the births that occur at each age in period 2 produces a period rate of 1.67 births per woman.  As the women in period 2 grow older and move through periods 3 and 4 (green squares), they begin to make up for the births they postponed at younger ages.  In period 3, the period rate rises to 1.83.  By period 4, the transition to the new birth pattern is complete and the period rate and cohort rate are both equal to 2 births per woman.

The example presented in the table above is consistent with recent data showing a decline in births at younger ages and a rise in births at older ages.  However, it is still too early to tell whether younger women are merely postponing having children until later, or whether they intend to have fewer children.  One recent study suggests the latter.(5)  Even if younger women expect to have more children at older ages, it is uncertain whether they will be able to fulfill their expectations given the ability to have children declines with age.(6)

The good news is current birth rates as typically reported can be a misleading indicator of future birth rates.  The bad news is we won’t know the real story until it happens later.

[5] Will Women Catch Up to Their Fertility Expectations? (bc.edu)

In honor of the July 4th holiday, this week on Facing the Future, we are once again running our recent program with David Gergen,  advisor to four US presidents (Nixon, Ford, Reagan, and C

Passing the Buck: How The National Debt Burdens Future Generations

This week on Facing the Future, I am reminded of the words of Willie Nelson:  “Turn out the lights, the party’s over….” After 15 years of extremely low interest rates following t