The economic devastation imposed by the coronavirus has been swift, steep, and wholly unlike any prior recession. In March, the government purposely induced a nationwide economic coma to curb the spread of the deadly coronavirus and deployed bazookas of money to minimize the disruption. These efforts were necessarily extraordinary and justified - Americans needed to stay home.

One cornerstone of the federal response has been federal funding and administrative support for temporary, expanded unemployment insurance benefits, including a $600 per week supplementary benefit that expires on July 31. Recent data published by the Bureau of Economic Analysis shows this program has been effective. Private wage and salary income fell by $680 billion in April, but unemployment benefits offset more than half of that decline - and 20 percent was attributable to the extra $600 per week benefit alone.

Last week, the Labor Department released surprising jobs-related data. Despite widespread expectations among nearly all economists and data watchers for more dismal losses, the domestic economy actually gained 2.5 million jobs last month and the unemployment rate fell from 14.7 percent in April to 13.3 percent. Suddenly, the fate of the expiring unemployment benefit is unclear.

Although the latest jobs data point in a positive direction, perspective is important: the unemployment rate is still very, very high. Hard hit industries like leisure and hospitality still have unemployment rates that are 2-3 times the national average, and survey errors suggest the official unemployment rate is probably 3 points higher than reported. Twenty million jobs remain lost, nearly 30 million people are collecting unemployment, and millions of workers have given up looking for work altogether. In the face of all this information, it would be foolhardy to suggest that a single data point – the May jobs report - somehow represents a new and sustained trend. It’s simply too early to tell. 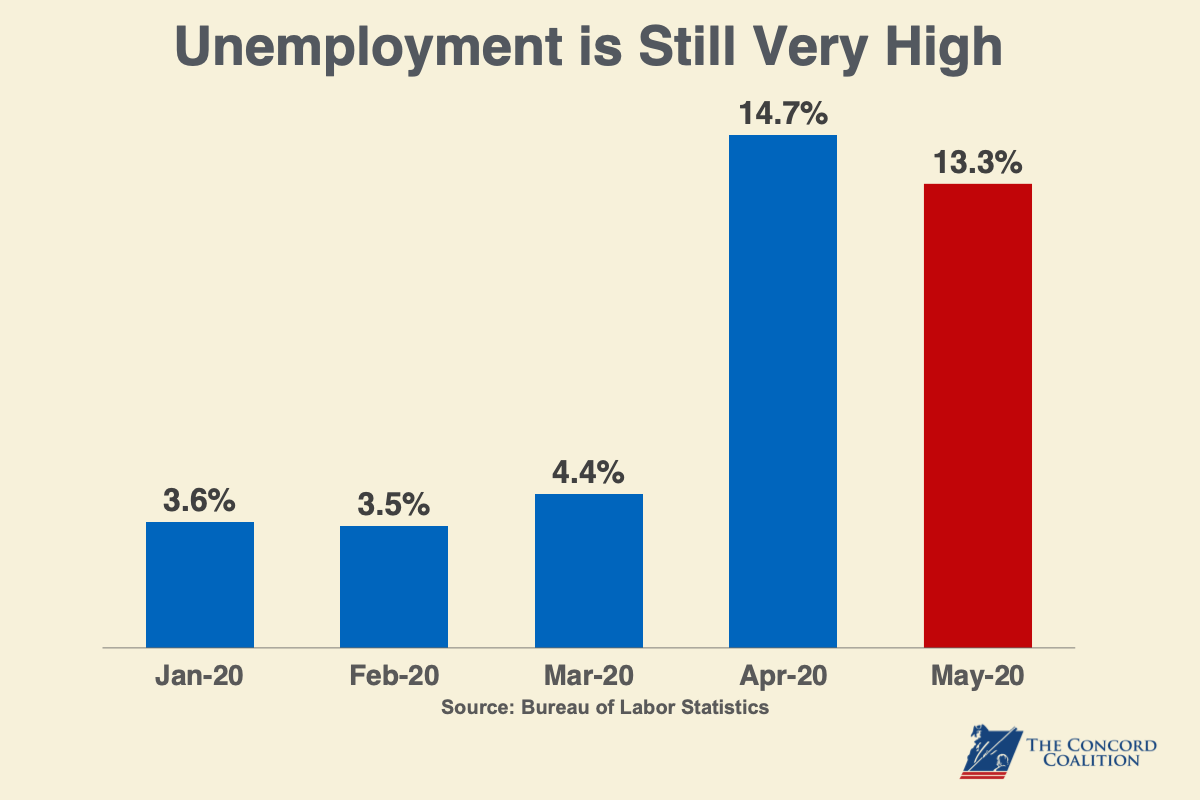 House Democrats have proposed extending the temporary $600 per week pandemic unemployment benefit for another six months,at a cost of more than $400 billion. They argue that allowing the payment to expire at the end of July would further weaken consumer demand and drive additional job losses. They highlight obstacles to re-employment such as well-justified fears of contracting the coronavirus at work and bringing it home to a family member, the lack of personal protective equipment in the workplace, the lack of comprehensive testing and contact tracing if an outbreak does occur, and the rapid disappearance of childcare options for working parents.

Senate Republicans oppose extending the program in its current form and they have some powerful ammunition. In a June 4 letter to Senate Finance Committee chairman Chuck Grassley (R-IA), the nonpartisan Congressional Budget Office examined the economic effects of this proposal and found that “roughly five of every six recipients would receive benefits that exceed the weekly amounts they could expect to earn from work” creating a significant disincentive to work for certain workers.

On average, regular unemployment insurance replaces approximately 45 percent of lost wages, but CBO discovered that the addition of the temporary $600 per week supplemental benefit pushed replacement rates well above 100 percent for many beneficiaries - a finding consistent with research published by the University of Chicago, the American Action Forum, and has been documented in several media reports.

As a consequence, CBO concluded that extending the supplemental unemployment benefit would have beneficial short-term effects (higher spending and higher output). Over time, however, CBO projected those effects would wane and the economy would actually be worse off in the long run (lower employment, higher debt, lower output).

As the program deadline looms, lawmakers are confronting a difficult policy question: Should the $600 per week unemployment benefit be extended, amended, or allowed to expire?

Throughout the pandemic, The Concord Coalition has consistently advocated for relief measures that are timely, targeted, and temporary. With these guiding principles in mind, we suggest Congress extend the weekly pandemic unemployment supplement, but with the following changes:

Combatting the virus has imposed a hefty cost – substantial increases in the federal deficit and debt - but doing nothing would have been even more costly. In debating how to best engineer a resilient economy in the face of the coronavirus pandemic, short-term fiscal responsibility means debt-financing only the most effective anti-recessionary policies. Over the longer term, it means investing wisely in projects that will contribute positively to economic growth - and paying for them.

A Compromise of Convenience - Not a Cure

Can Democrats Reconcile on Reconciliation?

This week on Facing the Future, we sorted through the various internal divisions among congressional Democrats that have slowed President Biden’s legislative agenda.

As Democrats in Congress continue to meet with President Biden to determine the ultimate size and scope of their social spending plan, it’s worth taking a minute to step back and consider