After collapsing by 22 million in March and April, 4.8 million workers returned to work in June, according to today’s Employment Situation Report published by the Bureau of Labor Statistics - significantly more than the 3-4 million consensus prediction among surveyed economists. This is the second consecutive month of improved job numbers after May’s report showed revised job gains of 2.7 million.

The unemployment rate declined to 11.1 percent in June, and the number of unemployed persons fell by 3.2 million to 17.8 million. Still, while unemployment fell in May and June, the jobless rate and the number of unemployed are still very high compared to pre-pandemic conditions - up by 7.6 percentage points and 12 million, respectively - since February. 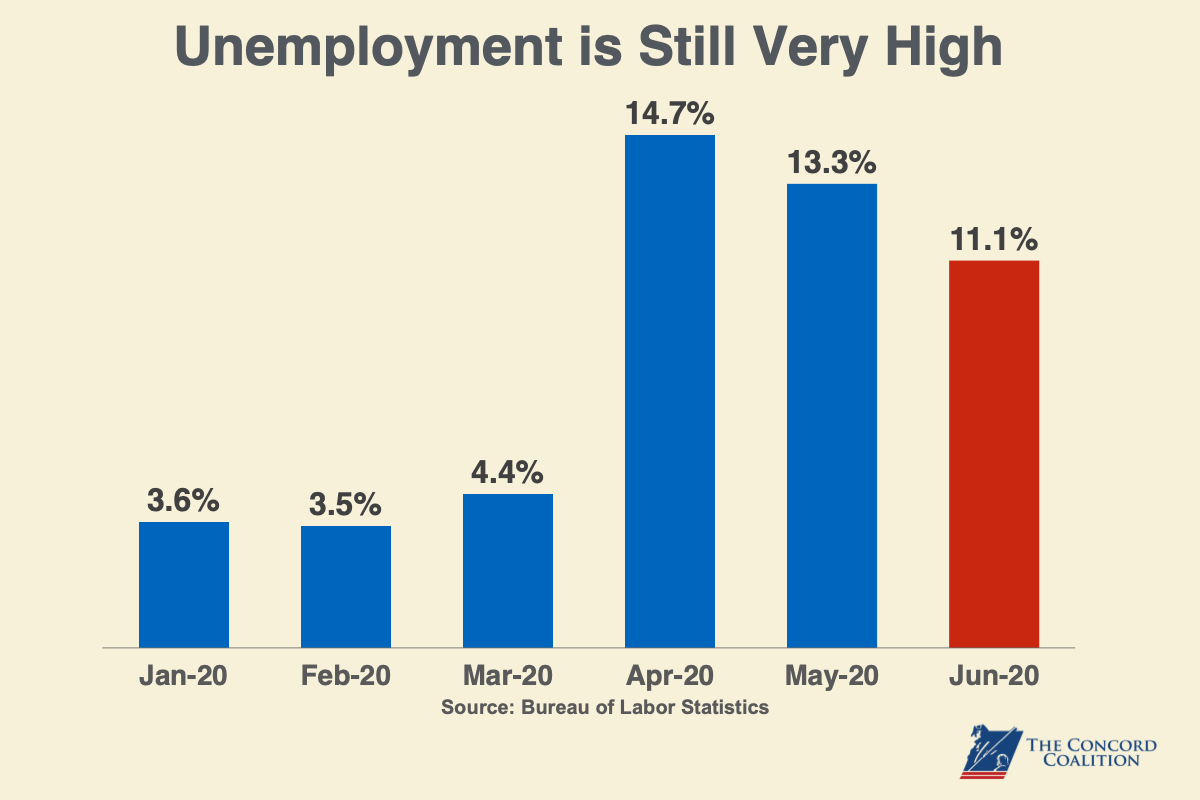 Job gains were pronounced in industries most affected by COVID-19. Employment in leisure and hospitality rose by 2.1 million, accounting for about two-fifths of the gain in total nonfarm-employment. Retail, health services and manufacturing added jobs as factories restarted, and dental and medical practices reopened.

The number of new applications for unemployment insurance fell by 55,000 to 1.43 million last week, the Labor Department said in a separate report Thursday. Unemployment claims have come down from a peak of nearly 7 million in late March but have stabilized near a historically high 1.5 million, an indication that companies continue to cut jobs. Overall, nearly 31.5 Americans are collecting unemployment benefits.

Jobs Data May Be Stale Already

Today’s jobs data likely reflects the nascent recovery that began in May and extended into early June as some businesses reopened and consumers ventured back out to shops, salons, and restaurants. Since then, however, an unanticipated and exponential rise in COVID-19 cases in major population centers in the south and west has caused many governors to rethink planned reopenings or to backtrack altogether, renewing closures and stay-at-home orders. This would suggest that the June unemployment data is already stale.

The BLS conducts its employment survey in the same week every month - the week of the 12th of the month - so the renewed closures and delays in re-openings announced in the last week are not reflected in the current report. The situation on the ground may be moving faster than the economic data can capture.

This has implications for the next pandemic relief bill under development. Lawmakers in Washington are expected to consider a fifth bill in late July. After spending $2.4 trillion so far this year to aid businesses, individuals, and healthcare providers, economists across the political spectrum agree that more fiscal support is needed, but the composition of that relief has not yet been determined.

Jobs data that does not reflect current conditions will make compromise difficult this time, especially as regions experience the pandemic and recovery differently - and in different stages. The unifying factor of the CARES Act - the third and largest pandemic relief bill - was that everyone received assistance. Individuals and households, large and small businesses, institutions, healthcare providers, and state and local governments all received aid. Passage of the CARES Act was easy in that compromise was largely unnecessary. This time around, compromise will be more elusive, hampered by backward-looking economic data that isn’t keeping pace with the quick-moving virus.

On the latest Facing the Future, I was joined by

This week, I hosted an informal online conversation with think-tank scholars Brian Riedl of the right-leaning Manhatta

On the latest Facing the Future, I was joined by Jared Bernst