Moving rapidly to pass the next installment of COVID-19 pandemic relief, on May 15 the U.S. House of Representatives passed H.R.6800, the Health and Economic Recovery Omnibus Emergency Solutions Act, or the HEROES Act. Although the Congressional Budget Office has not yet scored the bill, the 1815-page behemoth purports to spend an estimated $3 trillion on economic aid for state and local governments, individuals and families, healthcare providers, and small businesses – more than the combined total of the four previously enacted measures (H.R.6074, H.R.6021, H.R.748, and H.R.266).

The cornerstone of the HEROES Act is nearly $900 billion in economic aid for state, local, tribal and territorial governments, a major Democratic priority that many Republicans oppose. The bill also includes another round of $1,200 stimulus checks for eligible adults and would expand the pool of people who could receive them. It would extend unemployment benefits through January 2021, including the $600 per week pandemic supplement. It would provide another $75 billion for testing and contact tracing, a $100 billion “public health fund” for hazard pay for essential workers, $75 billion in mortgage relief, $100 billion for rental assistance, another $25 billion for the Postal Service, student loan forgiveness up to $10,000 per borrower, and expansions to federal nutrition and unemployment programs. It would also temporarily lift the SALT cap.

The HEROES Act will move to the Senate, but the chamber is unlikely to consider the measure any time soon or in its current form. The House bill was crafted without any input from Republicans, even though they control the Senate and the White House, and their support is necessary to get much needed aid across the legislative finish line. Moreover, Republican leaders fundamentally disagree with Democrats on the sense of urgency.

"We're basically assessing what we've done already…"I don’t think we have yet felt the urgency of acting immediately. That time could develop, but I don’t think it has yet…" said Senate Majority Leader Mitch McConnell (R-KY).

However, sustained increases in initial unemployment claims this month suggest the grim employment picture will extend into June, ramping up pressure for another economic relief measure after the congressional Memorial Day recess. It’s hard to predict, however, what that package might contain. As states reopen and some employees return to work, the Republican-led Senate is prioritizing business liability protections and expressing concern over budget deficits. Progressive Democrats in the House, however, want an even more robust spending package—a position that will concern their more fiscally-conservative swing district colleagues, and the White House is demanding a payroll tax cut that is unpopular with Republicans and Democrats alike. Where does the Venn diagram of policy solutions intersect? 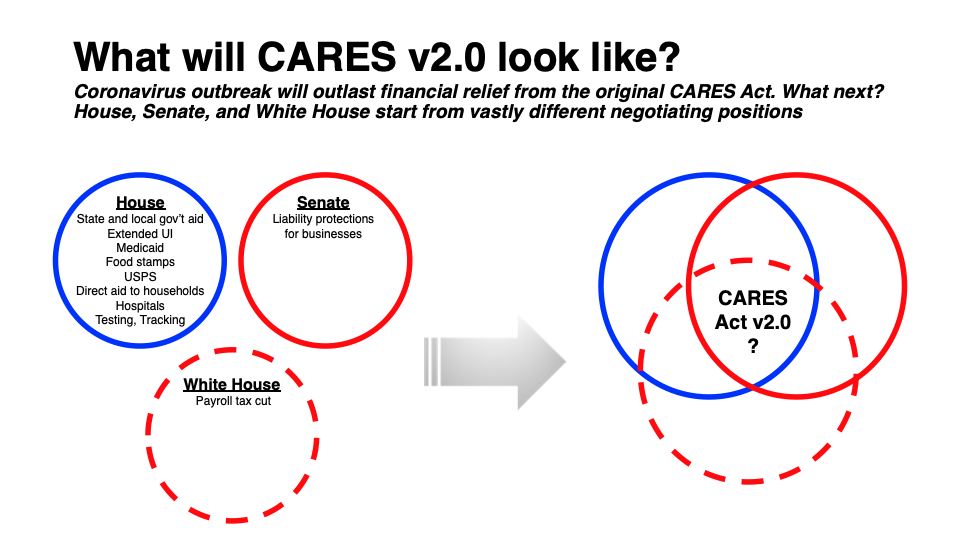 Despite the present acrimony, lawmakers will eventually have to negotiate. As the number of coronavirus deaths grows and the economy limps along half open/half closed, Congress will have to act to avoid lasting economic harm and unnecessary suffering. The foundation of a compromise package may be found in the following proposals:

The Senate will spend this week confirming nominations and then recess for the Memorial Day holiday. House members have already returned to their districts. A fifth pandemic relief bill is a virtual certainty, but already the calendar suggests the timetable will slip to mid-June before leaders start swapping proposals, and it could be July before a bill is enacted into law.

Every two years the U.S. House of Representatives reconstitutes itself as a new legislative body and adopts a set of rules governing the Chamber’s actions for the new Congress.

On the latest Facing the Future, I was joined by Concord Coalition Executive Director,

On the latest Facing the Future, I was joined by Ri

Coronabus: The Good, the Bad, and the Ugly

After months of bickering and delay, House and Senate negotiators finally agreed to compromise on a much-needed fifth installment of COVID-19 relief for individuals and small businesses.