This week, the Congressional Budget Office released its much-anticipated update to the 2020 budget baseline. The previous installment from CBO was published in March 2020, just ahead of the COVID-19 outbreak in the United States, the subsequent economic fallout, and prior to enactment of the four pandemic relief bills.

With less than one month remaining in the current federal fiscal year, the budgetary contours of FY 2020 are basically known. CBO projects the budget deficit will total $3.3 trillion this year, an increase of $2.2 trillion from the March baseline and more than triple the initial estimate. Most of the swing can be attributed to the economic fallout caused by the pandemic and the increase in spending enacted by lawmakers, specifically the $1.7 trillion CARES Act and the $480 billion “top up” provided by the Paycheck Protection and Healthcare Enhancement Act. 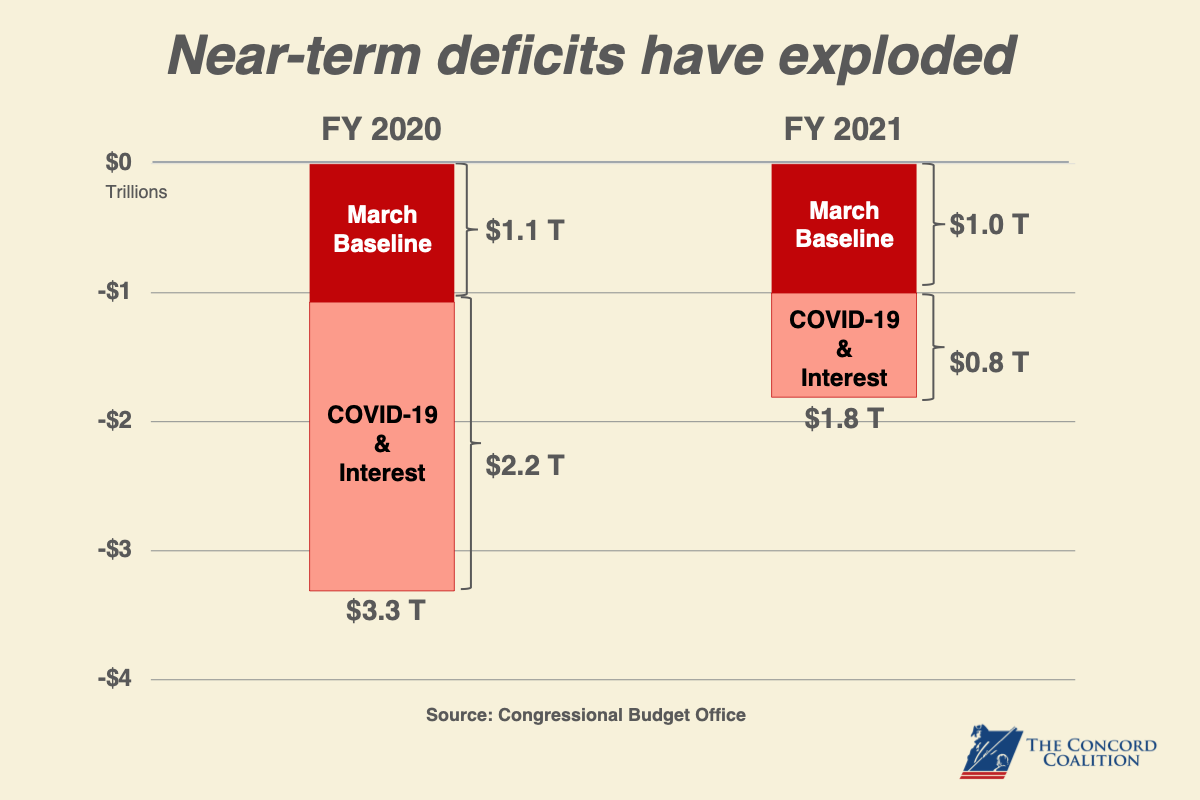 Assuming Congress does not pass any additional legislation, CBO projects annual deficits will recede from their highwater mark in 2020, but remain atypically large throughout the budget window, exceeding a trillion dollars in every year of the forecast period. 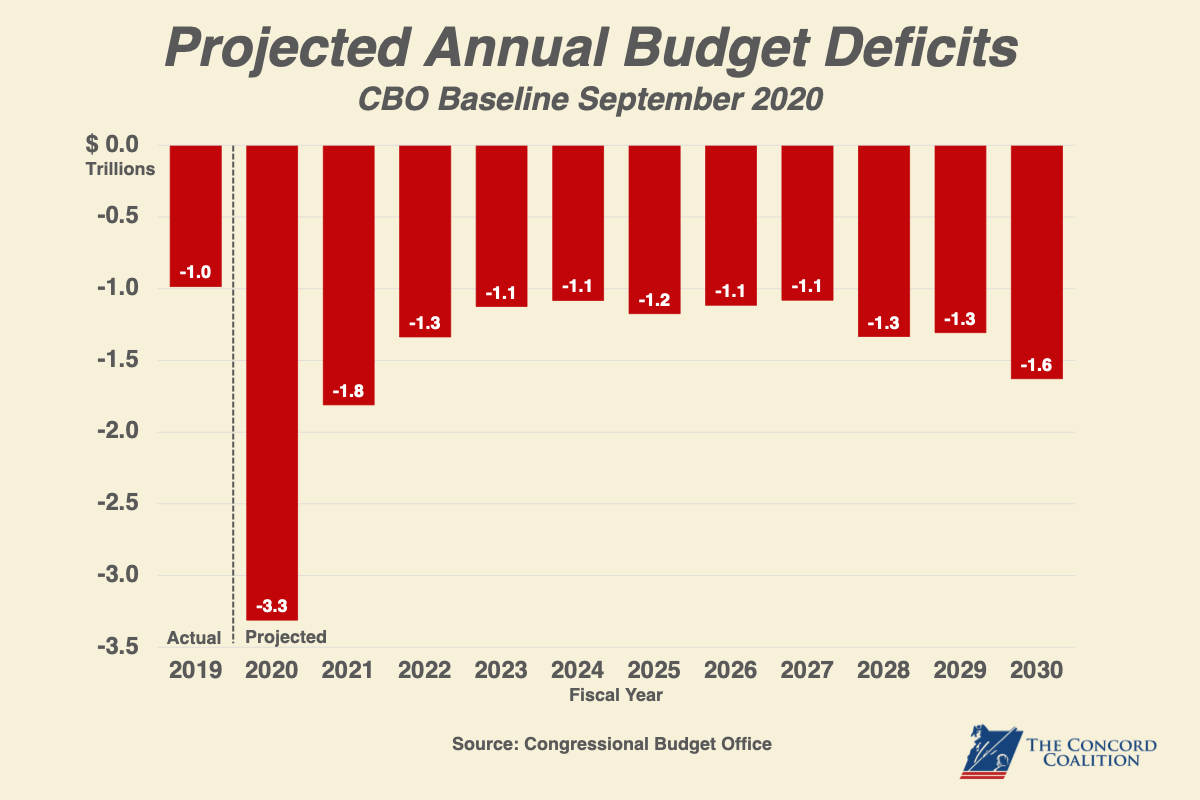 Measured as a percent of GDP – a technique that allows budgeteers to compare deficits across time – CBO estimates that the 2020 deficit will equal 16 percent of GDP, the largest since 1945. Over the 2020-2030 budget window, annual budget deficits will total nearly 16.3 trillion and average approximately 4.9 percent of GDP per year. 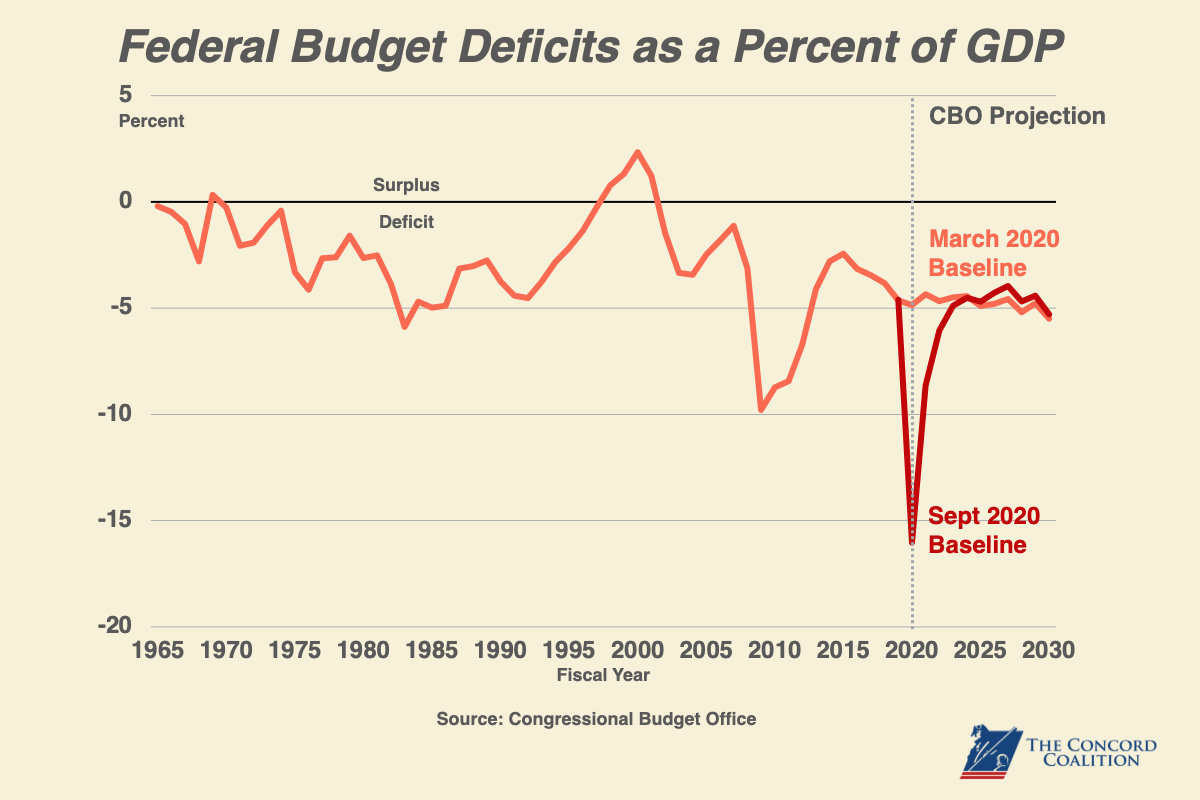 A Club Membership No One Wants

By 2023, CBO predicts debt held by the public will reach an ominous new record: 107 percent of GDP. Absent any legislative fixes or unforeseen economic booms, debt to GDP will climb further to 109 percent of GDP by 2030, the end of the budget window. 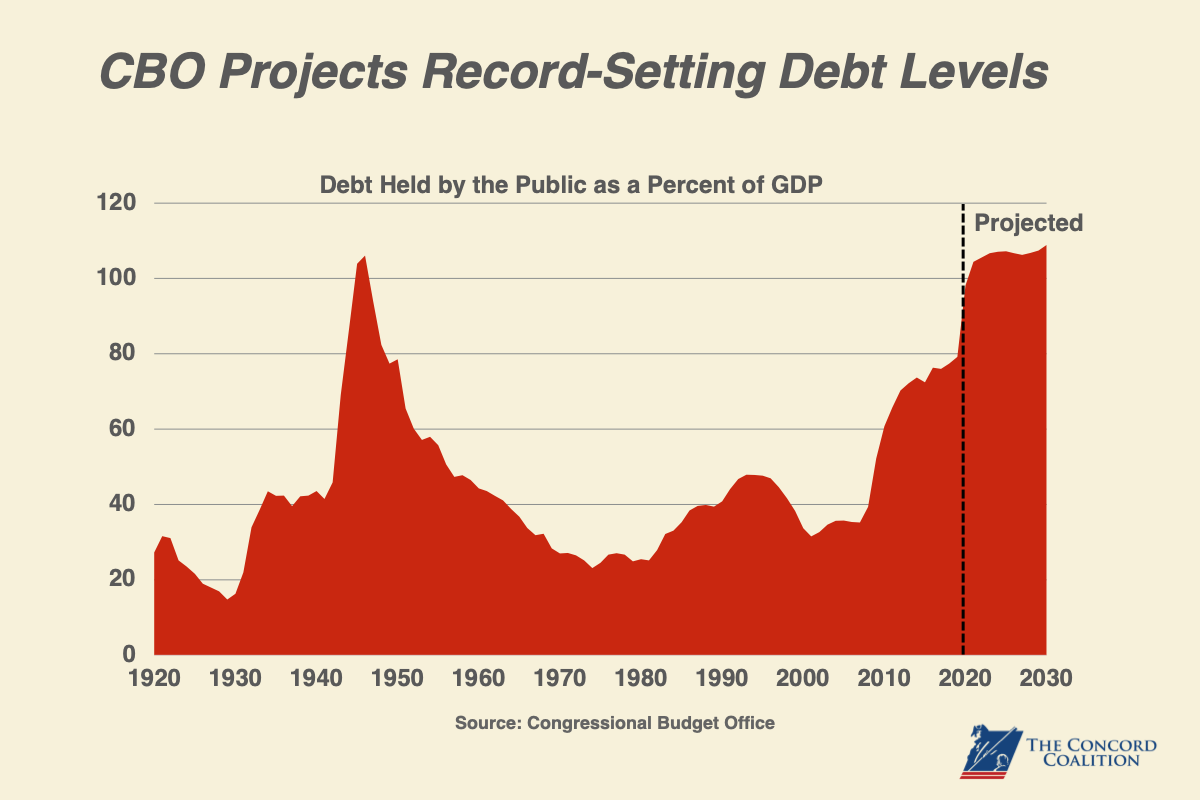 Projections of Lower Interest Rates Offset Some of the Imbalance

Budget deficits are driven by imbalances between outlays and revenues. In the September baseline, CBO projects revenues will be nearly $3 trillion lower than originally forecast in March, largely due to the economic impact of COVID-19 closures on jobs and income.

Net programmatic spending will be $1.4 trillion higher over the budget window, but this is an artifact of two crosscutting forces: higher spending attributable to enactment of pandemic relief bills, and lower spending on entitlements due to reduced inflation expectations.

The combined impact of lower revenue and higher spending is somewhat mitigated, however, by a major reduction in the interest rate forecast. In the September baseline, CBO now expects interest rates on short-term (3-month) Treasuries to be an average of 1.5 percent lower each year than originally projected in March - a 70 percent decrease. The agency’s forecast of longer-term (10-year) Treasuries was also reduced and is now an average of 1.2 percent per year lower in the first half of the budget window. As a result, even though deficits and debt are much higher in the September baseline than in March, net interest costs are $2.3 trillion lower, partially offsetting the deficit effects of higher spending and lower revenues. 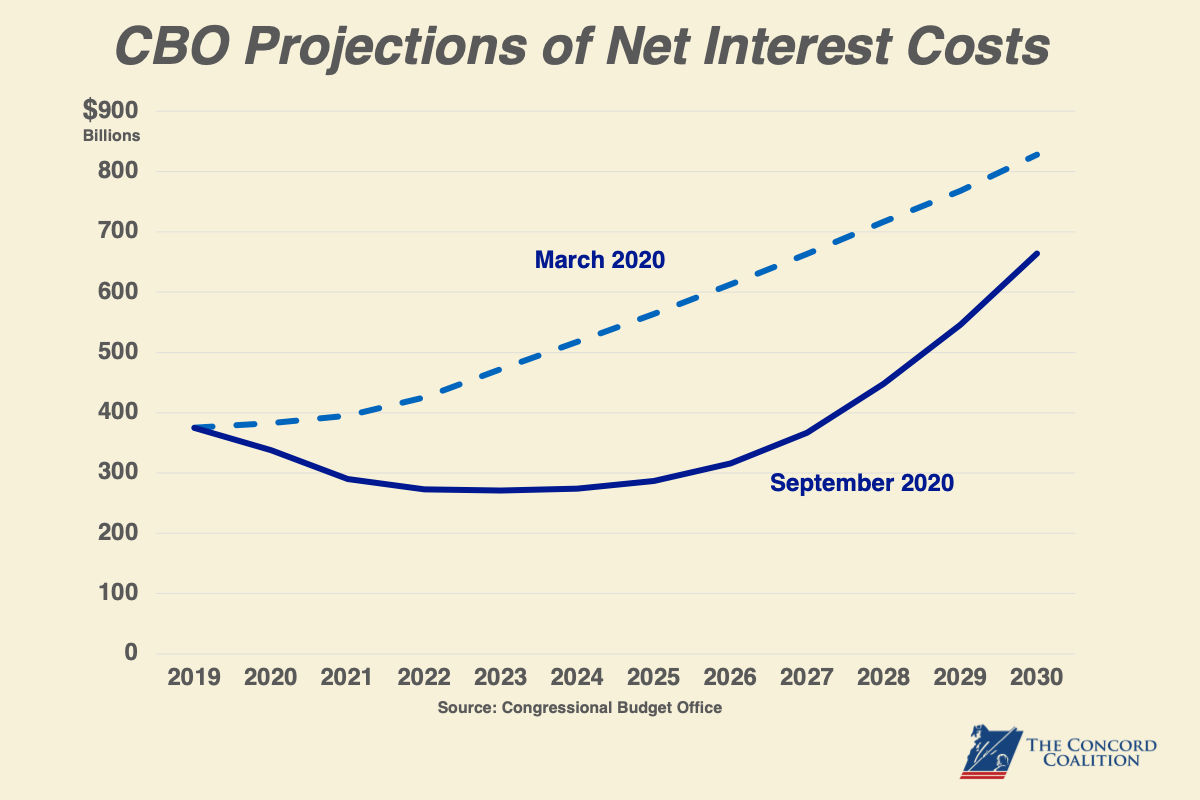 When the effects of lower revenues, higher spending and reduced interest costs are tallied, budget deficits are a cumulative $2.1 trillion higher over the 2020-2030 period than originally projected in March 2020. 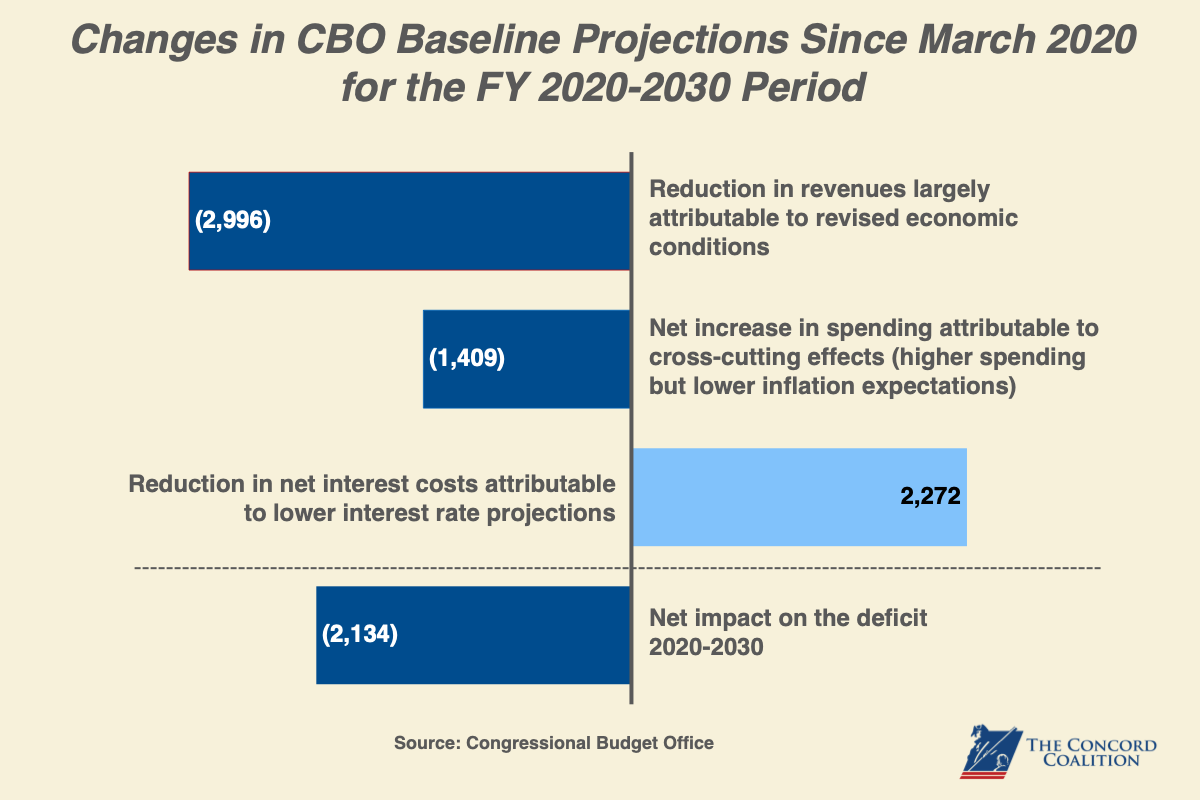 Despite eye-popping near-term deficit projections, the more significant and troubling aspect of CBO’s updated projections is that even when the budget and the economy begin to recover from the effects of the COVID-19 pandemic, pre-existing spending and tax policies will keep deficits and debt on unsustainable paths.

The new baseline shows that even with substantially lower interest rates, and with the unlikely assumption that Congress will allow many tax cuts enacted in 2017 to expire in 2025, deficits will exceed 5 percent of GDP by 2030 (up from 4.6 percent in 2019 before the pandemic hit) and the debt will continue its upward trajectory relative to the size of the economy.

Spending growth in the baseline is driven by increased costs of Social Security and the major health care programs (primarily Medicare and Medicaid) along with interest on the debt. Together, these categories will grow from 13 percent of GDP in 2020 to 15.1 percent in 2030.

Revenues will grow as well, from 16 percent of GDP this year to 17.8 percent in 2030. This assumes, however, that policymakers will allow the temporary individual income tax cuts enacted in 2017 to expire as scheduled after 2025. This unlikely scenario boosts projected revenues from 17.3 percent of GDP in 2025 to 17.8 percent in 2026. If policymakers extend those tax cuts, the deficits and debt in the following years will be substantially higher than shown in the baseline.

Major Trust Funds Projected to be Depleted within 11 Years

As the report notes, “No provisions in law dictate the funds’ procedures once their balances are depleted.” Taxes that support these programs would continue to be collected, but without the statutory authority to pay benefits in excess of receipts, these programs would be unable to remit to beneficiaries the amounts promised in current law.

In the face of a global pandemic that has sickened over 5 million Americans and killed more than 180,000, it is both inevitable and appropriate that the federal government run large budget deficits to defeat the virus and sustain the economy. The simple truth is that our economy, and by consequence the federal budget, will never recover if Americans don’t feel safe.

But these twin reports from CBO present a clear message – and warning – to federal policymakers. When the coronavirus pandemic passes, it is crucial that Congress initiate efforts to address the structural imbalance that predated this crisis.

It may be many months before policymakers can turn their attention from fighting the pandemic to growing the economy, but it is not too soon to begin thinking about what should be done when that time arrives.

The overriding concern of federal lawmakers should be to ensure that today's appropriately aggressive fiscal actions, made necessary by the twin public health and economic crises attributable to COVID-19, do not exacerbate the pre-existing long-term structural imbalance between spending and revenues.

Near-term policies that expand the debt need not be made permanent to be effective. If we decide as a nation that some of these policies are desirable on a permanent basis, or if new ideas are advanced to increase spending or cut taxes, we should make those decisions as part of a long-term plan with due consideration for the fiscal impact, including how they would be financed.

This week on Facing the Future, I am reminded of the words of Willie Nelson:  “Turn out the lights, the party’s over….” After 15 years of extremely low interest rates following t

This week on Facing the Future, we looked at challenges ahead for Social Security and Medicare.

Breaking Down the CBO 10-year Baseline

This week on Facing the Future, we relied on a panel of Concord Coalition staff to help us break down the latest 10-year Budget and Economic Outlook released by the nonpartisan C

Creeping Toward the Fiscal Cliff