Mixed messages and a high degree of uncertainty were featured prominently in updated economic projections issued on Thursday, July 2nd by the Congressional Budget Office (CBO). These projections will be used in updating CBO’s 10-year budget outlook later this summer.

Overall, CBO says that the “economic outlook for 2020 to 2030 has deteriorated significantly” since its last baseline projections in January. As examples, CBO noted that “the annual unemployment rate averages 6.1 percent over those 11 years in the current projections, whereas it averaged 4.2 percent in the January projections” and that “the annual level of real GDP in those years is now projected to be 3.4 percent lower, on average, than it was projected to be in January.” 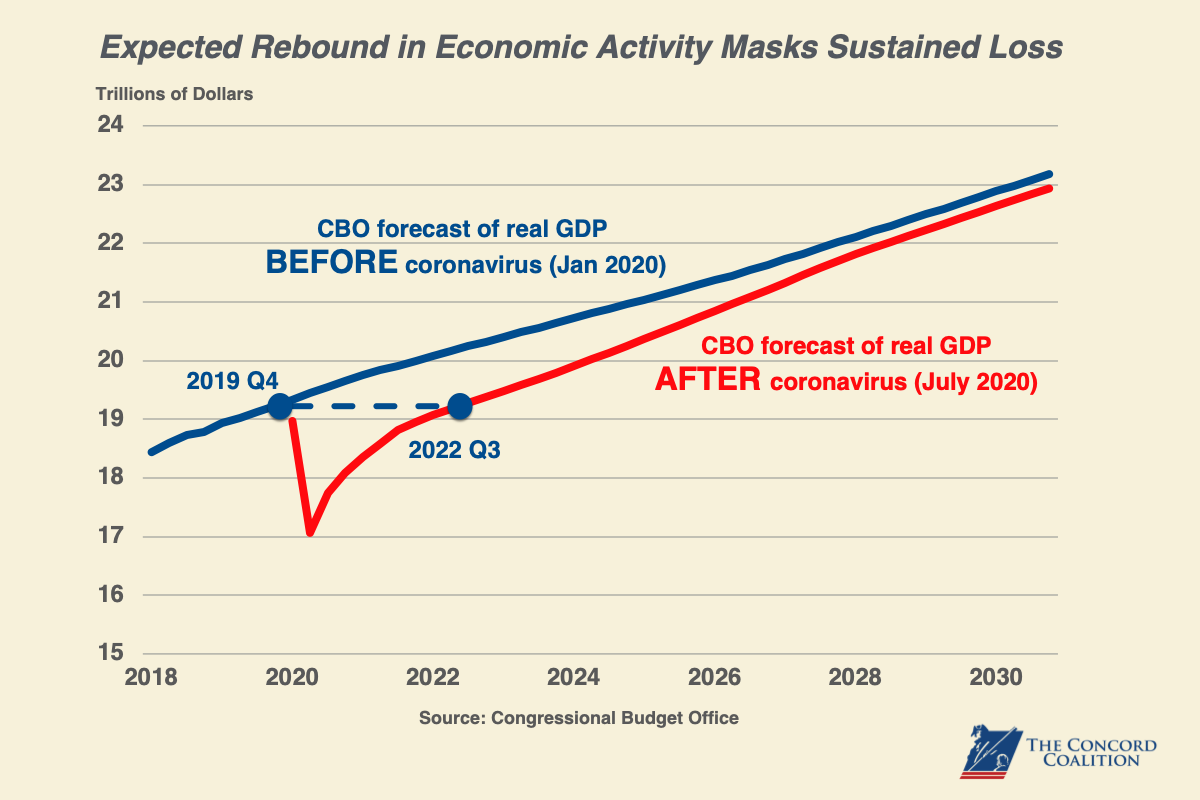 The recovery will slow in 2022 with real GDP projected to grow by 2.2 percent, reaching the prepandemic level of GDP, while the unemployment rate remains high at 6.9 percent by the fourth quarter.

Beyond that point, real GDP growth will slowly decline to 1.8 percent in 2029 and 2030. The unemployment rate falls to 4.4 percent by 2030, still higher than the 3.5 percent rate before the pandemic hit.

Two significant factors, inflation and interest rates, are projected to remain low throughout the 10-year outlook despite the rapid rise in debt.

An important caveat added by CBO is that its projections “are subject to an unusually high degree of uncertainty, which stems from many sources, including incomplete knowledge about how the pandemic will unfold, how effective monetary and fiscal policy will be, and how global financial markets will respond to the substantial increases in public deficits and debt.”

In addition to uncertainty about the course of the pandemic itself, CBO also had to make assumptions about the extent and duration of “social distancing” due to its effects on economic activities. During the second half of 2020, CBO projects that social distancing will decline by about two-thirds from its April peak and gradually dissipate to zero by the third quarter of 2021.

The economic projections were released early “to provide the Congress with CBO’s current assessment of the economic outlook in a rapidly evolving environment.” They are particularly timely because Congress and the president have many crucial decisions to make in the coming weeks on the nature and extent of additional legislation to support individuals, businesses and state and local governments still struggling with the economic effects of the COVID-19 pandemic.

They are all the more important because a day earlier the president’s Office of Management and Budget (OMB), in a break with past practice, declined to issue updated economic projections in its Mid-Session Review of the budget (MSR) saying, “Any such estimates would be entirely speculative, given the range of uncertainty underlying potential future paths of economic growth.”

Ignoring bad numbers won’t make them go away and uncertainty is inherent in any economic projections. Policymakers with big decisions to make need all the help they can get. Indeed the extent of uncertainty and the range of possible outcomes are important factors for Congress to consider as it determines whether to extend or let lapse the many initiatives that have been enacted so far to support the economy.

The good news in the report is that the economy should be able to regain much of its recent loss once we can be sure that the pandemic is behind us even if the timing is uncertain. The bad news is that there will likely be long-lasting effects on employment even when the economy recovers.

CBO Director Phil Swagel joined Facing the Future to discuss this update to the 10-year economic outlook in more detail. Click here to listen and watch.

CBO Director on the Good, Bad and Uncertain

Before Congress adjourns for its district work period in August, House and Senate Democrats hope to pass the FY 2022 budget resolution.

Why the National Debt Still Matters

This week on Facing the Future we talked with Richard Jackson, President and Founder of the Global Aging Institute, and the author of a

Beware of Budget Gimmicks that Hide the True Cost of Legislation

To prevent their agenda from stalling, President Biden and congressional Democrats  must secure two major policy victories before recessing for the upcoming month-long district work perio

The Defense Budget: a Primer (Part 2)